Drew Cain was born in Glasgow, Scotland. As a child, he travelled around the world with his parents, spending a number of years in West Africa and Saudi Arabia. In the 1990s he studied at a university in Pennsylvania and it was here that he had his first experience behind a microphone with his own Sunday night college radio show.

Back in Scotland in the summer before his final year at university, Drew found himself on the set of Trainspotting as an extra. He was stripped to the waist, sprayed with strawberry scented glycerine and told to dance manically whilst blowing a whistle. From that day, he knew which industry he wanted to work in. Soon after, Drew blagged his way onto another film set, this time as a runner and by the end of his first day, managed to crash the producer’s car into the camera truck. Instead of firing him, the producer gave Drew a small part in the film… as the driver of a sports car.

Various film and TV production jobs followed with Drew working as an assistant director on numerous films and television shows in the UK. It was as a direct result of watching the likes of Robert Duval, Helena Bonham Carter, Ewan McGregor, Richard E Grant and Colin Firth at work that made Drew realise he’d much rather be performing in front of the camera than working behind it. At the age of 30, he left his old life in Scotland behind and headed down to drama school in London.

Since then, Drew hasn’t looked back. He has featured on stage, television, film and radio in a wide variety of guises with perhaps the weirdest character of all being a slightly camp alien holographic computerised guidance system, dressed in purple.

Drew’s career as a voice actor began over ten years ago. His voice has been heard on television, radio, video games, narrations, corporate films, the internet and you might even find him guiding you through the exhibits of the occasional museum. He now has his own professional home studio at the bottom of his garden. The morning commute is very short. 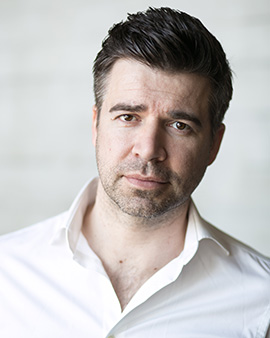